The primary focus of research in our group is phase transitions that occur in protein solutions.

Our second set of motives is linked to the fact that the production of medications requires procedures that ensure narrow distributions of the micro-crystallites that comprise the drug preparation—this is a prerequisite for steady drug release. As more and more proteins are being tested for pharmaceutical applications, the need to control the nucleation and growth of protein micro-crystallites will increase.

A third group of factors that underlies our interests in this area is that phase transitions can be used to generate structures inaccessible to other methods—linear arrays of protein molecules, droplets of protein solutions that contain from 1,000 to 10,000 molecules and occupy atto-liter volumes, etc.

Traditionally, the formation of one particular ordered protein phase, the crystal, has been investigated to support the efforts of structural biologists in understanding the atomic structures of the protein molecules, and to shed light on the functions performed by these proteins.

Last but not least, we have argued that protein systems are particularly attractive models to elucidate the general mechanisms of phase transformations. The sizes of the protein molecules, from a few to several tens of nanometers and the characteristic timescales of the processes of growth of the new phases, of a few seconds and longer, are comparable to the lengthscales and time scales accessible to modern analytical techniques. This has allowed in-situ, real-time monitoring of the processes of phase transitions at the molecular scale.

In the logical framework of our research efforts, the first building block is the study of the interactions between the protein molecules in solution. Typically, such investigations are carried out in dilute solutions, relatively far from the phase diagram area of multiple phases, yet they have proven to be useful for a fuller insight into the phase transformations. We use static and dynamic light scattering techniques in house, and, in collaborations with colleagues, small angle x-ray scattering, to determine the second virial coefficient under varying external conditions, and from these data to deduce the potentials of interaction between the molecules. An additional gain from these data is that the second virial coefficient data allow evaluation of the solution non-ideality, and in this way a more accurate definition of the driving forces of the phase transformations.

A second group of efforts aims at determinations of phase diagrams of solutions of different proteins, i.e., on the thermodynamics of phase transformations. Depending on the phase line to be determined, we use microscopy and light scattering techniques.

In the area of new phase growth, we investigate the growth processes occurring at molecular, capillary, transport, and macroscopic lengthscales. These include incorporation of molecules into the respective growth sites, generation of growth sites and new layers, in the cases of crystal growth, supply of material to the growth sites by means of solute diffusion, interactions between the growth steps, step bunching and mean to control this phenomenon, defect generation and evolution, etc. We employ scanning probe and interferometry techniques that allow us to cover the various length- and time-scales involved. 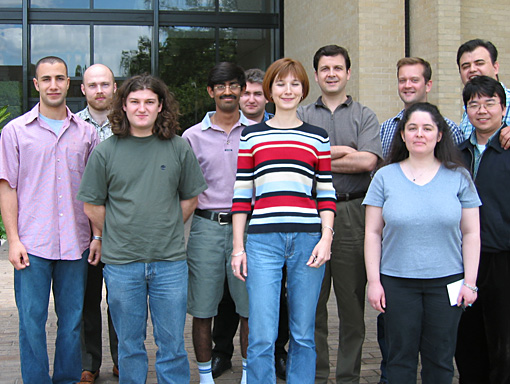